The last Korean holiday (Foundation Day) until the end of the year (sigh) was on Wednesday. I decided to enjoy the great fall weather by crossing off one of the things on my 'to do before I leave Korea' list and went to Gyeongbok Palace in Seoul. This palace is considered the biggest and most beautiful palace in Seoul and I think I agree with this assessment. Besides the palace itself, I seemed to be an attraction as well. I was stopped 3 times and asked to have my picture taken. After being asked by the picture takers where I was from, I was told that I had pretty eyes and was beautiful. Needless to say, that made my day just a little more pleasant. 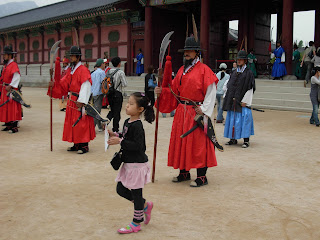 Right outside the main entrance to the palace are these guards dressed in traditional uniforms. Obviously, this girl could care less about the man with an ax standing right behind her. I initially felt sorry for these guards having to just stand there for hours and have their picture taken endless number of times. But then I got approached for the second time in about 15 minutes by a giggling group of teenage/college girls and realized that it may be a slight annoyance to be a tourist attraction, but it is kind of fun in its own strange way. 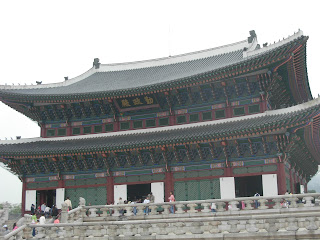 This is probably the biggest building in the whole complex and one of the first ones that you see. Behind it is a carefully laid out complex of courtyards and smaller buildings, each perfectly designed and decorated that seem to just keep going and going. 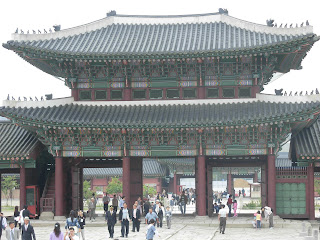 Main gate of the courtyard wall outside the main building. 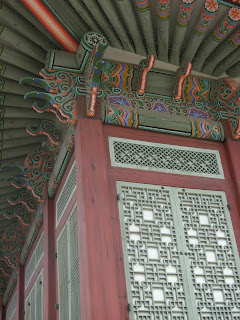 Ever since my time in China, I love the colors and shapes of Asian architecture. 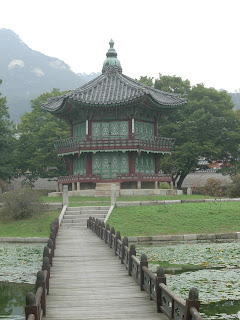 Attached to the rear of the palace was a beautiful garden with a lotus filled pond and a small temple adorned island in the middle. 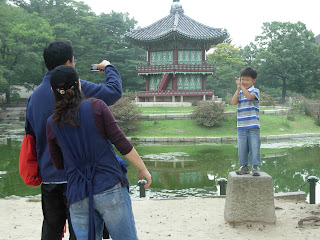 This boy was having a fun time hamming it up for his parents' camera. 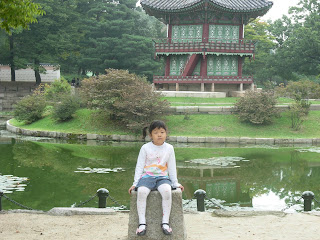 His sister, however, wasn't having as much fun. 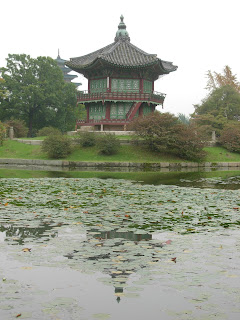 Here I love how the reflection of the temple is visible in the water even through the scattered lotus leaves. The garden was one of the most peaceful places I have visited in Korea. I felt like I could spend hours sitting on a bench by the edge of the pond, just reading a book and people watching. However, I didn't want to become a potential target for more photo takers so I kept moving on. All in all, it was a wonderful way to enjoy the last holiday of the year.
Posted by amei sonsaengnim at 12:15 PM