This note, along with a bottle of mango juice (really good!) was on my desk when I walked into my classroom on the first day of summer intensives.

Hello, Amy teacher? My name is Cindy and your student for first. I'm glad to meet you. Please good teaching for us. bye-bye. From. Cindy.

Sucking up or just a sweet girl? Hard to tell. Maybe a little bit of both, not that I don't mind. Who would ever have thought that someone would try to suck up to me?
Posted by amei sonsaengnim at 9:20 PM No comments: 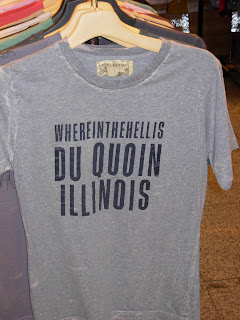 I saw this shirt at Singil station last weekend and then saw it a guy wearing it today in Suwon. Somehow, I doubt that they really know where Du Quoin is and it makes me wonder who first heard of Du Quoin and thought it would make a good tshirt. I wish I could get a job designing tshirts in Korea. That would be fun.
Tshirt style in Korea is like nothing else - lots of random pictures of everything from cartoon characters to Hollywood celebrities (that must be the newest way to know that you made it in show biz), and even more random English. To see some examples, go to http://www.engrish.com/. My friend here just got one of her pictures posted on the site (click on Clothing and it's the picture for July 27).

Posted by amei sonsaengnim at 8:47 PM No comments:

Korea is a country obsessed with cell phones. A majority of my students, especially the older elementary and middle school students, have a cell phone. The ones that don't usually have a plan or agreement with their parents to get a cell phone on their next birthday or if they do well on their school tests.
Only in Korea is it not considered rude to answer your cell phone when you are out with other people. In fact, you can talk as loud as you want on your cell phone on the subway without anyone caring, but if you have a loud conversation with the friend sitting next to you, you will start to get some evil stares.
This past weekend, I decided to become Korean and "upgrade" my "hand phone." I liked my phone, but it had the annoying problem of not sending text messages, especially when it was crucial for people to get the message (like when we realized our plane to Jeju left 1 hour earlier so we had to rush to the airport).
I went to Yongsan Electronics Mall in Seoul, which is THE place to buy anything electronic in Seoul and possibly in all of Korea. It is a huge building with 8 levels of anything electronic you could ever want to buy. The cell phone floor is slightly overwhelming, jampacked with brightly lit booths and more cell phones than there are probably are in the entire state of Montana. 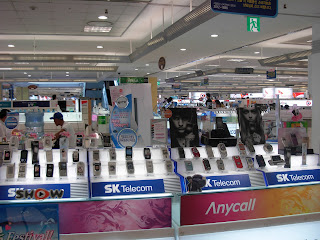 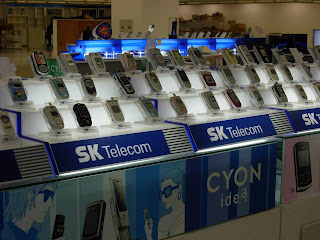 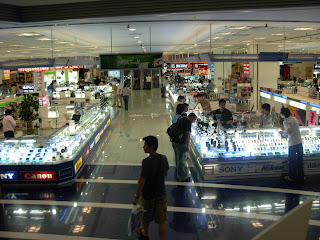 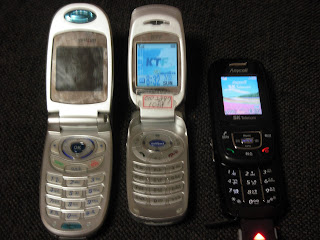 After a little browsing and a little bargaining, I had a new phone. Here is a picture for comparision between the 3 phones I now own (I never thought I would ever have more than 1 phone, but I had 2 at my conference job, and now I have 3). My American cell phone is on the left, my old Korean phone is in the middle, and my new Korean phone is on the right.
Posted by amei sonsaengnim at 7:47 AM 3 comments: 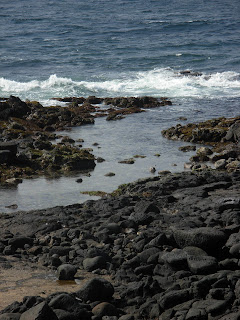 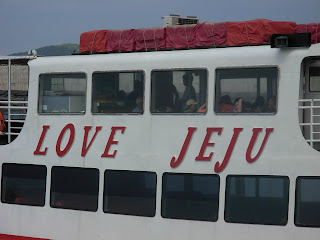 Boat I saw waiting for the ferry to take us to U-do. 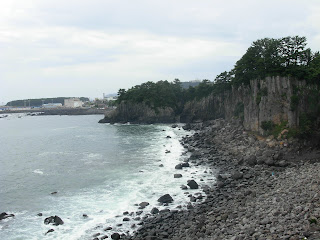 A rocky beach near the waterfall. The island was formed by a volcano that is still in the middle of the island. 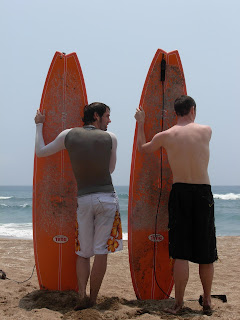 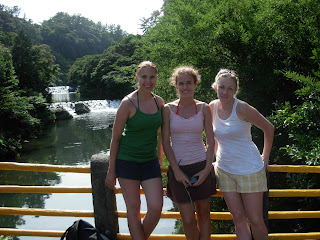 Me with Mandie and Sharon, my old friend and new friend.

I had a great time on Jeju. Coming from the midwest, I appreciate any time that I can be near a beach and the ocean and getting to spend an entire day at the beach is just wonderful. Besides the beach, we went to 2 different waterfalls, a lava cave which was dark and cold, and another smaller island called U-do (do means island in Korean) where I rented scooters with the guys and drove around the island on its 1 lane main road. And then it was back to school and teaching like always. Some of us returned with a tan, some of us returned with a mild sunburn, and one of us returned with a broken toe.
Overall, it was the best way to celebrate my 6 months anniversary in Korea, especially with a great group of people who I feel lucky to work with and be friends with. We had some adventures on the island and I am glad that these were the people I can share the memories with. I remember hearing an old quote that's goes, "No matter where you are in the world, it's your friends that make the difference," and that is definitely true whether I am in the US or in Korea or anywhere else.
Posted by amei sonsaengnim at 10:56 AM No comments:

I had a 4 day weekend this past week so myself & 5 other teachers went to Jeju-do which is an island off the south-west coast of Korea. It's a popular destination for Koreans, especially honeymooners. Here are some of the best pictures from the trip until I have time to put up more and write more about the trip. 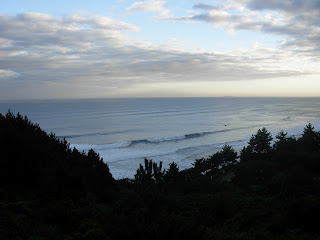 View of the ocean. 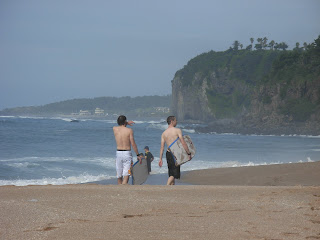 Matt and Jonny at the beach on their way to go body-boarding. 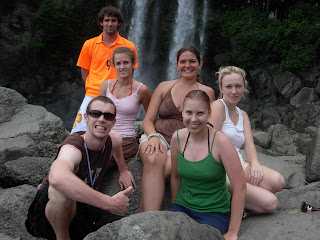 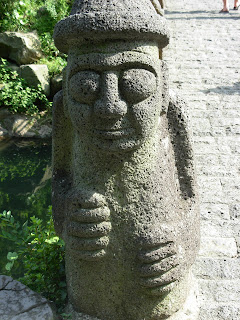 The island's unofficial symbols are statues of these funny looking creature/people. 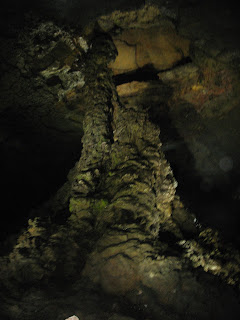 Posted by amei sonsaengnim at 10:38 PM No comments:

Apparantly, my students think my classroom should be converted into a zoo. Today, Max in my Basic class (the same class that has Billy with the ants in it) showed up with a baby chick in a plastic tube that looked very similar to a Pringles can. Of course the arrivial of this new addition to our classroom created quite the stir. I had to tell practically every student to sit down as I tried to figure out myself what exactly was going on. I finally made it through all the students to see Soon Jae holding this tiny chick that was shaking. I did not want to have to fight with the chick for attention for the next 110 minutes so I made Max put it back in the plastic tube and take it to the counter so they could "watch" it for the rest of class.
When Max returned, I asked him where he got his bird. He said some man was selling them outside the school. Very interesting. I wonder if Max's mother knows that her son is buying chicks. For that matter, I wonder how Billy's mother feels about his ant fascination and collection.
By the way, on the latest name change day in Basic class, Billy asked to change his name to Chunk, a character from one of the first books we ever read. He had been asking to change his name to Chunk for several months now, but I kept telling him no. Finally, I gave in and agreed to call him Chunk. I have to admit that I like it now. In a strange way, it suits him, even though he is a typical small and scrawny looking Korean kid. And it is kind of fun to say, "Chunk, sit down!" or "Chunk, be quiet!" which I have to do many times a day.
Posted by amei sonsaengnim at 1:15 AM 1 comment:

Ricky is one of the students in my H4 class (middle school, high level). He is a very studious boy who was very shy and nervous at first, but now has grown more comfortable and chatty. He is very intelligent in an awkward bookworm kind of way. I am particularly impressed with his writing. He has a unique ability to express himself in English as shown by the following examples.

-On describing a funny event that had occured in his life, "When I come back to home, I tread on droppings of dogs. I was very tired and sad."
-On explaining what he would do if he was a teacher at our school, "Of course teachers have many weak points. For example. If students don't listen teacher's words, then teacher has many stressful and can die early."

It is quotes like those that make marking up to 200 student essays a month somewhat more enjoyable.
Posted by amei sonsaengnim at 11:56 PM No comments: 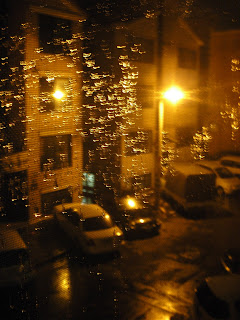 The street outside my apartment at 1:30 in the morning. I don't mind the rain at night, in fact I like the sound of it. Its the daytime rain that I hate. 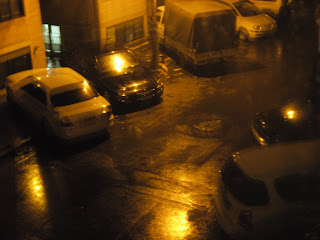 The rainy season in Korea has begun and won't end for about a month. I had been warned about the rain by some of the other teachers who have experienced it before. My initial thoughs were "Rain for a whole month? That's kinda neat. Something different and maybe kinda cool, at least something to tell people at home about. It's only a month. I'll survive." But then the first day (and by day, I mean whole entire day) of rain came and my thoughts completely changed. I now have new respect for Noah. I understand how he must have felt a little better now. You know the rain's coming, but you think it can't be that bad until it comes and then you quickly realize that this sucks. Here's to trying to keep dry for the next month.
Posted by amei sonsaengnim at 1:44 AM No comments: