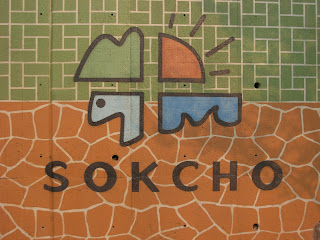 My old friend from China, Amy, and I went on a weekend trip to Sokcho, a coastal city on the east side of Korea. It was great to get away, even if it was only just for 2 days. I needed to get out of Suwon and be in new surroundings.

We got up early Saturday morning for a 4 hour bus ride. After arriving in Sokcho, we easily found a motel, dropped off our stuff, and then went exploring the city. We walked down the main street, stopping for lunch at a small restaurant where the waitress was thrilled to see some foreigners. Every time she came over to our table, she had a printout of some English phrases with the Korean beneath them. She would cautiously ask us one of them like, "Is this table to your liking?" or "Would you like a receipt?" and then light up when we answered her. After lunch, we continued on down to the beach to see the East Sea.
It was so refreshing to be around the water - to hear the steady crashing of the waves and the laughter of children as the water unexpectedly splashed around their ankles, to see the beautiful green water contrasted with the bright white of the breaking surf, to feel the mix of the freezing cold water and rough pebbley sand on my feet. And then.....(read the next post!) 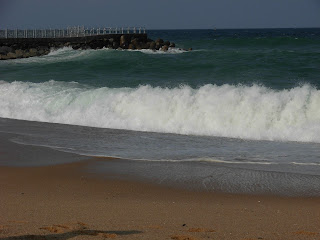 Later that day, Amy and I went to Seorak Waterpia which is the Korean equivalent of a water park, but even better. The best part was the outdoor hot springs pools with 40 degree Celsius water where we just sat for over an hour, watching the sky slowly darken. It was so relaxing to just sit out in the cool air while being wrapped in the warmth of the peaceful water and then force yourself to get out and quickly run to the next pool so you could appreciate the warmth even more. It all seemed too perfect, like a dream that actually comes real but still feels surreal. The warm, soothing, and calm water at the Waterpia was such a contrast to the cold, sharp, and powerful water of the East Sea earlier that day.

The next day we went to Mount Seoraksan - reputed to be one of the best mountains in Korea. It was great, despite the fact that it was raining. Amy and I weren't going to let that stop us though, so we got some ponchos and took a cable car up to one of the peaks. After we got to the top, we did a little hiking as we had intended. One of the trails led us to a rocky area where I climbed almost straight vertical up, trying not to think about the fact that if I slipped, the least I would do is break a bone. The climb was worth it though, even through all the mist, you could see how beautiful and majestic the area was. The rain also didn't stop us from gushing over the simplistic and fragile beauty of the numerous cherry blossom and magnolia trees at the base of the mountain. 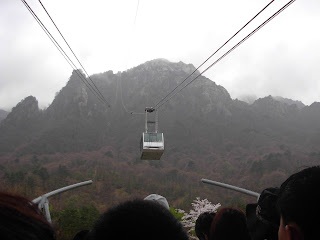 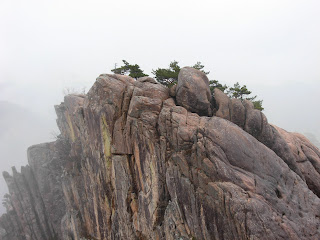 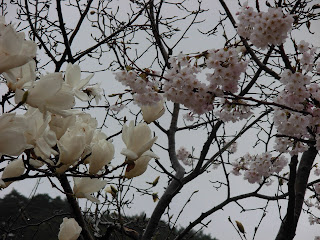 On the 5 and 1/2 hour bus ride back to Suwon, I kept listening to Death Cab for Cutie on my ipod and thinking how this trip was the perfect way to celebrate my first 3 months in Korea and the perfect way to recharge my spirits for the next 3 months.
Posted by amei sonsaengnim at 12:41 AM