Lessons I have learned from my students 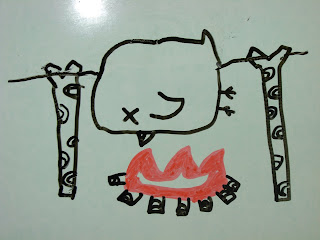 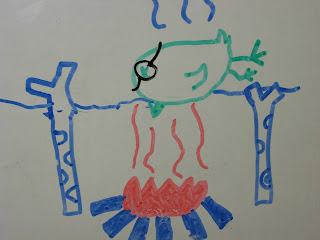 Remember what I said about my Basic kids drawing pictures of Chick being roasted over a fire. Well, here are some photos of that. They make me laugh & I hope they make you laugh too.
My Senior level students have to write 5-7 essays a month. As time consuming and painstakingly frustrating as they are to correct sometimes (Have you ever tried to read misspelled English in broken grammar with unclear sentence structure and make sense of it?), I actually really enjoy them because they give me a great insight into the lives of my students. Here are some of my favorite excerpts.
Topic - If I could visit any place in the world, where would I go and why
"I want to go North Korea. They are poor. South Korea give food for them. I want to go Norht Korea, but present South Korea people doesn't go there. But futher we are going to there. We are figting a long time, but now we're have a rest. We don't know when again figting. I have some picture, but I thing 'It is realy?' I want see North Korea from my eyes.......I want to go to USA. They all fat people in USA. They eat only hambuger, meat, chiken, and pizza all day. USA people have a gun, that is dangerous for other people." This is from Ally - a very quiet girl with a shy sweet smile who is very open and honest in all her writing.
Relations with North Korea are very important here. Articles about the issue daily occupy at least half of the opinions section of the newspaper and at least 1 front page story refers to North Korea. This is especially true after the signs of progress made at the latest talks in February in which North Korea agreed to shut down their main nuclear facility in return for fuel aid.
Topic - What are you scared of and why?
"First I am scared of my father. They're very scarey. My father is very tall and strong. He shouts at me. My ears are very aching. When my father is very agnry he hits me. He hits me everywhere. I'm very sick I'm scared of my father." This is from Andy - a boy bigger than me who usually doesn't talk much, but everynow and then lets a big grin cross his face. Unfortunately, what we would consider child abuse in the US is very common and an ingrained part of Korean culture. It was very hard to read Andy's essay and those of several other students, including Ally, who wrote that they were scared of getting hit or yelled out by their parents, especially since I am powerless to do anything about it other than make sure to make sure my class is a positive experience and atmosphere for my students.
Through reading and class discussion, my students teach me certain and rather unusual Korean words. For example, the Korean word for trampoline is "bahng bahng" which is you say it sounds like the noise you make jumping up and down on a trampoline. Sometimes, an English word sounds like a Korean word - the English word "copy" for example is very similar to the Korean word "ko pee" which is a nosebleed. This is not as bad as the word "salsa" though, which has the distinction of sounding remarkably similar to the Korean word for diarrhea "sol sa."
Korean students also sometimes mistakenly believe that an English word they have incorporated into their own language is really a Korean word. For example, most American children would think that pizza or taco are American words and not Italian or Spanish. The other day in one of my Junior classes, when discussing a playground, I started to draw a jungle gym. One 14 year old boy, Joey, excitedly shouted out "jungle gym" from the back corner of the room. "Yes, good!" I said and then proceded to write jungle gym on the board. Joey then quizzically said, "Teacher, jungle gym is an English word?" "Yes, Joey, it is." "Oh."
Posted by amei sonsaengnim at 8:46 PM