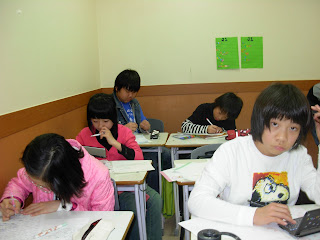 Here are some pictures of my Senior 1 class writing penpal letters to my brother's 8th grade class in the US. I got the penpal idea from Mandie who had tried to do it with her class, but never got it off the ground. Luckily, my brother's teacher loved the idea and has been great emailing me to get it started.

When I first told my students about writing letters to American students, they were confused and somewhat skeptical, thinking it was just another one of crazy Amy Teacher's ideas. But once we started talking about things to write about, their eyes lit up with excitement and they couldn't wait to start writing. I brought in special stationary for them to write a final nice version of their letters before I scanned them and sent them by email to the US. I also took pictures of my students and every day they ask me when the letters and pictures from the US are going to arrive. Here are some excerpts from their letters: 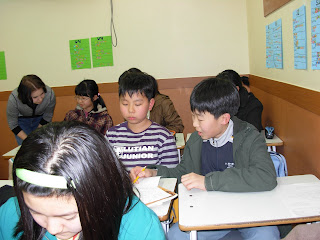 From Mark - "I am from Korea where are you from? I want visit to you. Do you like kimchi? I like very well. I want you to come to Korea. Korea is very good world." Several students wrote about kimchi since I suggested that they tell the American students about Korea. I think I'm going to have include an explanation of kimchi, which is cabbage pickled in a spicy red sauce and served with everything, for the American teacher.

From Ally - "What kind of food do you like? I like steak and pizza, but it is make me fat. I don't like dog meet, because it is gross." Maybe I should include another explanation about how dog food is a delicacy in Korea and people don't just kill their pet dogs when they get hungry.

From Jasmin - "My grade is 6. 6 grade is the best grade in Korean elementary school. This is different from the U.S.A. I heard American students (You) don't have to go to academy from my teacher. Wow! Most of students in Korea have to go to 1 or 2 or 3 academies. How I envy you!" My students were shocked when I told them that American students only go to school from 8 am to 3 pm and don't have to go to any special study academies afterwards. For most of my students, English school is just one of the many extra academies they have to attend after their regular school.

I hope that through exchanging letters, I can open up the eyes and minds of both the Korean and American students to another way of life halfway around the world. I want them to realize that the world is a big place, with lots of differences between countries and cultures, but that it is possible to make friendships with someone of a different nationality, race, religion, and culture than you.
Posted by amei sonsaengnim at 11:06 AM