All the teachers not teaching 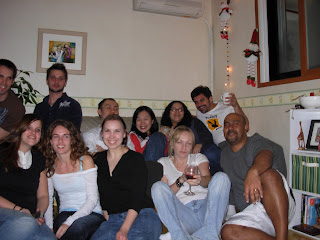 All of the teachers at my school (except 1) got together this past Saturday night for a big going away/wedding potluck supper party. In the picture there are (from right to left): Matt (with half his head cut off), Matt's friend Sarah who works at another branch of our school, Matt's friend Emeil who works at a university in Seoul, Mandie, me, Victor, Gina, Annette, Sharon, Dave, and Neil. There are only 10 teachers at my school and we are all really close. Thankfully, everyone is fun to hang out with and easy going. We usually celebrate Fridays by going out to eat after we get off work. Not many restaurants in our area are open after 10 pm so sometimes it's a little difficult, but Korean barbeque places are always open as a good reliable standby.

The party was to celebrate Gina, a Korean who grew up with her parents in Saudi Arabia, who is getting married in a few weeks. It was also to commemorate Victor, an Australian Malaysian, who is leaving our school in 2 weeks and Neil and Annette, a couple from South Africa, who are leaving at the end of March.
As for the rest of the teachers: Dave, Matt, Sharon, and the missing teacher Joanna are all from Canada. Dave is my building mate; he lives a floor below me. Mandie & I are the token Americans. When I tell my students that I am from the USA, they look at me in disbelief and question me if I am really from America. A majority of the English teachers here are from Canada and most Americans in Korea are military so the students are a little surprised to have an American teacher.
Before I came, my friend from college, Mandie was emailing me about how glad the other teachers were that I was coming since the teacher I was replacing was a bit of a jerk that no one liked (which was fine, because he didn't like any of them). I thought it was strange that the rest of the teachers already liked me before they even met me, but now I realize how big a deal it is to get a new teacher.
I was the first new teacher at my school in 5 months, but we are starting to enter a big transition period. 3 teachers in March, 1 at the end of April, and 3 more over the summer. Since our school is so small and our group so tight-knit, it is nervous getting new teachers. You hope that they are going to be neat people who will be able to become part of the group. You hope they will be fun, interesting people who will want to get together on the weekends. You hope they won't be strange and weird and mean and self-isolating.
Even though I knew Mandie before going to Korea, I still found it kind of difficult at first to find my place within the group. Everyone was great and friendly and wanted me to fit in, but it's still hard figuring that out. It felt like when you join a conference staff partway through a cycle. Everyone else has already formed a bond, and as nice as they are to you, you still feel like an outsider for a while, until you have formed a bond with them. But now I have.
The party was so much fun and it felt like I had known these people for more than 7 weeks. We had a late meal and later went to a noraebang - a place where you rent a room to sing karaoke with all your friends. 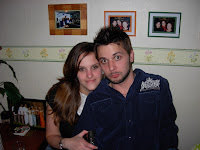 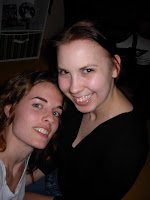 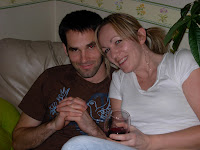 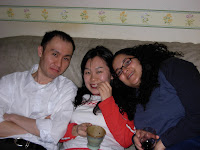 Victor, Gina, and Annette
Posted by amei sonsaengnim at 5:37 AM