This is another great Korean pop song. It's by a group called Super Junior T. They are a small side group of an even bigger group called Super Junior. By big, I mean that the group has 13 members. Isn't that a little excessive? Teenage girls are the only ones who don't think so. Anyway, this song has a catchy chorus and is pretty much just a silly song which is why I like it. Basically, it's the Korean word for backwards said backwards.

I've been hearing this song a lot lately. Korea has a presidental election on December 19 and one of the 12 candidates has apparently chosen this as his theme song. The words have been changed so that the chorus now goes, "Lee Myung Bak, Lee Myung Bak, Lee Myung Bak, Yah, Yah, Yah." There are this trucks that will park in major areas like near Lotte Mart or the subway station and blast music/propaganda about their candidate while people dressed in matching jackets with Miss America type sashes with the candidate's name and number on it stand waving their arms and passing out flyers. It's an interesting campaign strategy that I would love to see someone like Barack Obama or Hillary Clinton try to emulate back home. 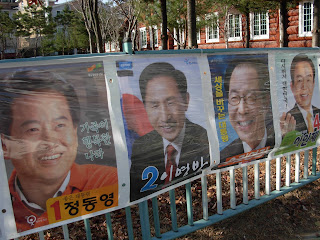 Posted by amei sonsaengnim at 11:07 AM