The biggest event in Korea recently has been the arson of the nation's top cultural treasure. The South Gate in Seoul, called Namdaemun or Sungnyemun, was built in the late 1300s. On February 10th, an elderly Korean man, still angry about the amount of money he received from being forced to sell his land to the Korean government over a decade ago, set fire to the top of the wooden structure. It burned for several hours before finally collasping.
The aftermath was huge. All of Korea was in shock over this event. Many of my students brought it up in class and were personally sad and upset that someone would do this to something that their country holds so dear.
A week after the fire, Julian and I went into Seoul to see the remains of the gate. 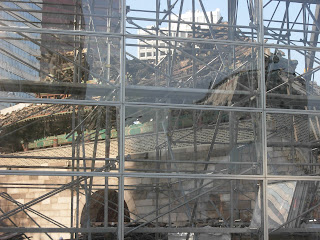 The gate was quickly enclosed and shut off from the public. However, a glass wall is part of the enclosure so that people can come and look at the destroyed structure. 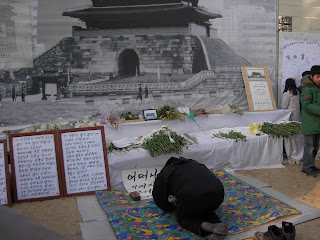 This man was bowing down in front of the memorial set up on the lawn in front of the gate. What sounded like traditional wailing/mourning music was playing from a loudspeaker. The atmosphere around the gate was similar to that for a funeral. 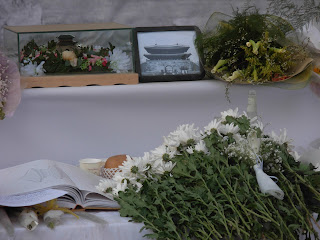 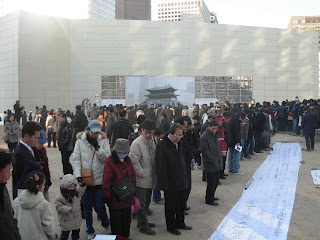 Hundreds of people were there to see firsthand the burned gate and to express their sorrows by laying flowers or writing personal sentiments.
Posted by amei sonsaengnim at 4:07 PM