At school, we were allowed to celebrate Halloween with our students. I say 'allowed' because our manager does not like anything that takes away from class/study time. In her own words, "Teachers, if you want you can have small party for Halloween with your students, maybe 30 minutes. But actually I don't want you to." Guess what all of us did anyway? Most of us even dressed up in some sort of costume like Gina and I did. 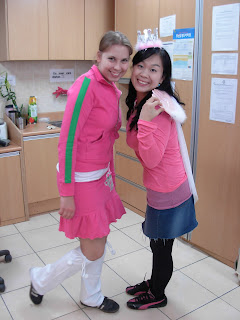 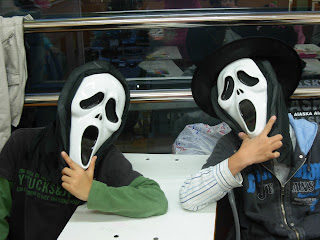 Two of my Basic 5 students, Jack Black (left) and Peter (right) also wore costumes. By the way, I added the Black to Jack's name to make it more fun to say. 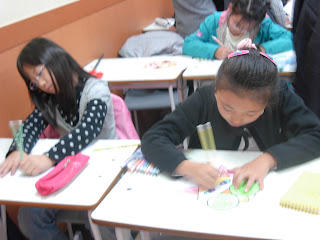 My Basic 5 class is very young (most of the students are 10 and a few are 11 and 12 years old) and at a very low level so they loved my idea of making masks. Here are Jully (left) and Karen (right) busy coloring. 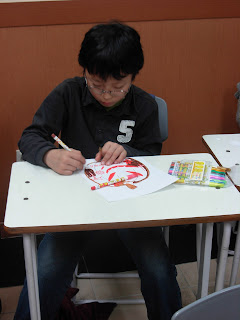 Here is Mark King Kong (I added the King Kong part, but only after Mark would answer every question with King Kong. For example: What do you eat? King Kong eats Empire Steak Building. Yes, Steak Building and not State Building.) actually sitting in his seat and being quiet for once. Proof that miracles do happen. I love this kid, but he does drive me crazy. 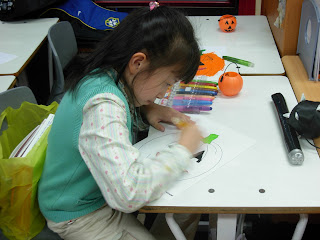 Jenny hard at work on her jack'o'lantern mask. 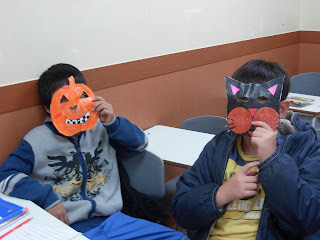 We also made masks in my Senior 5 class. When the students saw that my Basic 5 students had made masks, they eagerly begged me if they could do the same activity even though they are all 12 years old and at a much higher level. Here are my 2 Jameses. This happens a lot at my school, having 2 students with the same name. Therefore, each teacher comes up with a creative way to distinguish between the two. In this case, another teacher who taught these students before me came up with the solution of NJ (New James on the right) and OJ (Old James on the left). 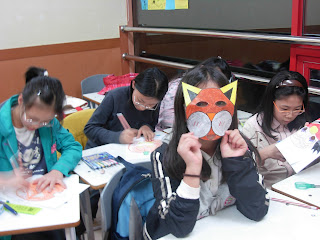 The girls of my Senior 5 class: Christine with the cat mask, Emily to the right, then behind is Flora who is barely visible, Sue in the black shirt, and Mina in the turquoise jacket. 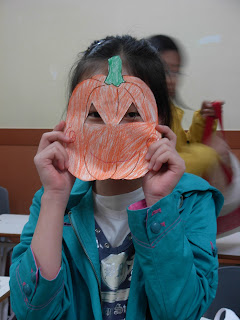 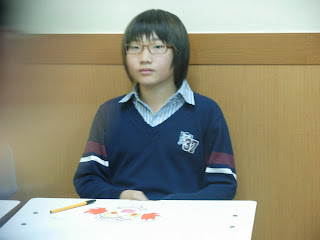 This is Andy, my last student in Senior 5. As this picture shows, Andy thinks and acts like he is too cool, but I've found that there is a soft side to him as well. He is a grade older than all the other students and he spent a year in the United States (Utah to be exact) while his mother was studying English. On the first day of class, I was trying to make conversation with each student. When I asked Andy what he liked, his answer was "I only like sleeping, eating, and girls." Girls are a popular topic of conversation between us. Since September, Andy has broken up with his original girlfriend because she bored them, then he got a new girlfriend who has broken up and then gone back out with him at least twice. When I told Andy he needed a better and nicer girlfriend, he said, "But I love this girl." I have to admit that Andy is one of my favorite students. His too cool attitude sets him apart from the rest of the students. I also like that Andy sits by himself in the back of the room and smugly smiles at my jokes and grudgingly participates when he feels like it which shows just how smart he really is.
Posted by amei sonsaengnim at 10:54 PM