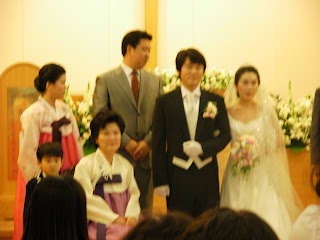 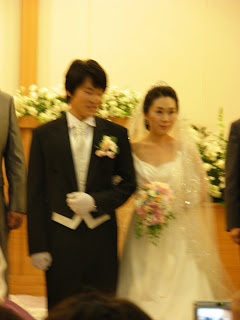 On March 31, one of the teachers at my school, Gina (a native Korean who grew up with her parents in Saudi Arabia) got married. She invited all of us to her wedding which she warned us was going to be done in typical Korean fashion. Even though I was given a rundown before, it was still very very interesting. To start, Korean weddings give a whole new meaning to the term "shotgun wedding." Basically, they are a get in, get it done, and get out kind of affair. We arrived at this huge church in downtown Seoul a few minutes before the ceremony started. First, we went to go say hello to Gina and have our picture taken with her. It is traditional for the bride to sit before the ceremony for all the guests to come see her. Very different from American weddings where the bride is secluded since it is bad luck for the groom to see her. Then we went to sit down in the hall (not the main part of the church) for the ceremony. Unlike American weddings which sometimes feel like whole theaterical productions, Korean weddings are much simpler. No bridesmaids or groomsmen, no music, no over the top decorations. Basically, Gina and her father walked down the aisle when it was time to start. There was no announcements or any indication beforehand. She just appeared and started walking and that was it. We (or rather everyone else, since we were the only foreigners there) sang a hymn in Korean. The pastor said somethings and then someone sang a song. Gina and her new husband then perfomed the traditional bows to both sets of parents, the mothers wearing the traditional Korean dress called hanbok. Then, the newlyweds posed at the front of the hall for pictures and walked out together. And that was pretty much the whole ceremony. From start to finish, it was around 30 minutes. The most interesting thing was that while Gina's wedding is going on, everyone is running around right outside the hall getting ready for the next ceremony that is going to start soon after Gina's finishes. The doors at the back of the hall leading out to the lobby were open the entire time and all the noise from the rest of the building and possibly the whole block came in. People also came in the whole time, some of them (including the director of our school) 20 minutes late. The people that were in the hall the whole time started talking to each other, presumbably to contribute a more pleasant sound to the racket coming in from the outside. It was completely different from American weddings which are much more solemn events that people show up on time for and are super quiet through out. After the ceremony ended, we ended up in a picture of the bride, groom, and all their guests. Then we were shown to a restaurant across the street for lunch. When we finished lunch, we were free to leave whenever we wanted. No special reception, no toasts, no cake. The entire wedding was something I will always remember because it was a view into Korean culture and because of how important it was to my fellow teacher, Gina, who I wish the best of luck and happiness in her new marriage. I am very grateful and honored that she shared her special day and culture with me.

Posted by amei sonsaengnim at 12:11 AM